One of the most important skills to succeed at online poker is pattern recognition.
This can apply to:

Online Poker is all about Pattern Recognition.
And these patterns repeat all over again and again and again.
Hence identifying a pattern early gives you an advantage.

PokerTableScout.com offers you another weapon to spot patterns in your opponents play.
More specific an analysis about when a certain opponents likes to play.

Let’s look at some examples to make things clear: 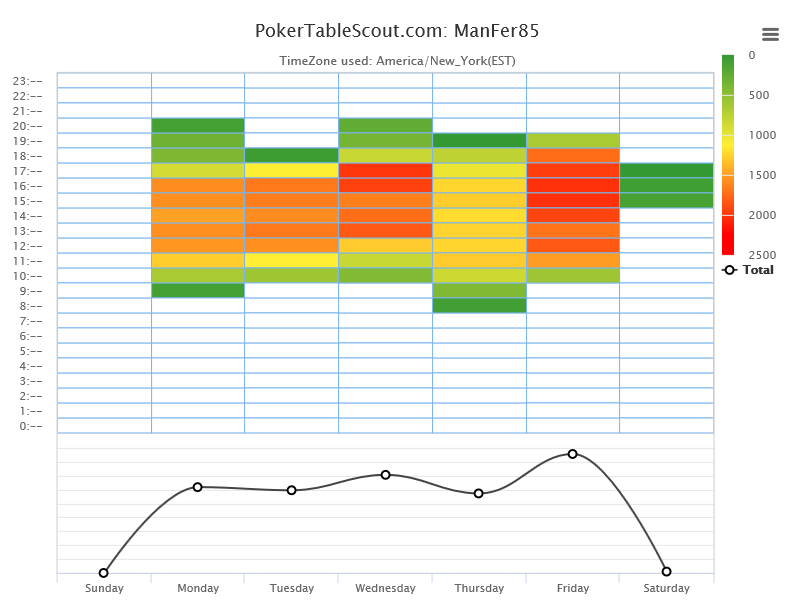 The graph above shows an analysis of the player ManFer85s presence at the poker tables.
Looking at the graph one can see that he’s online most of the time between 9am and 8pm Eastern Time.
He’s probably a regular within that time zone, and he plays a pretty high volume of hands.
Nevertheless he doesn’t seem to play that much sturdays, and he doesn’t play at all on sundays!
Comparing the days he’s active, we can find the peak volume on Fridays.
His sessions doesn’t seem to exceed an 8 hour period. So when you meet him about 7-8pm EST he’s probably tired/exhausted and short before ending his session.
Statistics for ManFer85

Let take a look at another player: 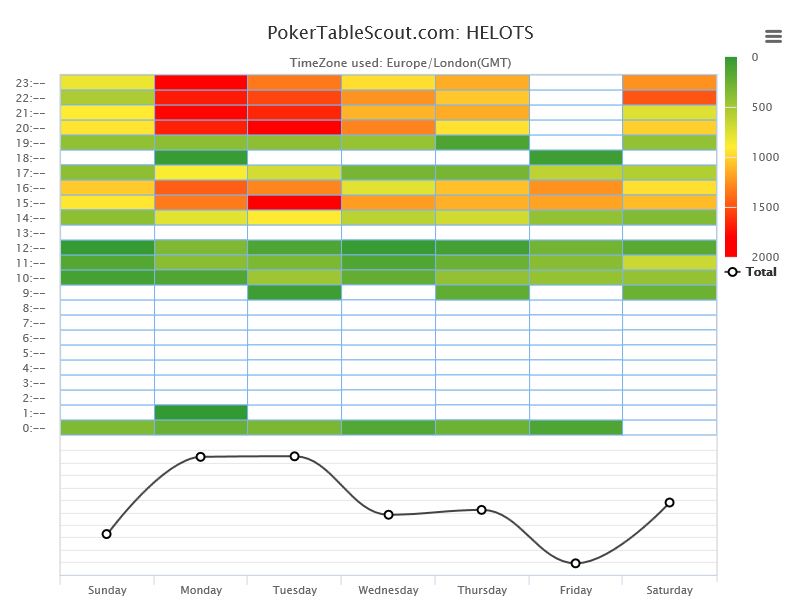 Judging by his online presence he seem to be in a different timezone than ManFer85 (probably London).
One obvious difference between ManFer85 and HELOTS is that HELOTS doesn’t seem to care about weekends.
He plays on saturdays/sundays just like any other day.
But there’s one interesting pattern that’s outstanding. He seem to make a break between 1pm and 2pm, and another one between 6pm and 7pm.
This means his seesions are running about 3-4 hours. One can tell by that, that he is a very disciplined player, what will probably reflect in his play, too!
Statistics for HELOTS

Let take a look at a third player: 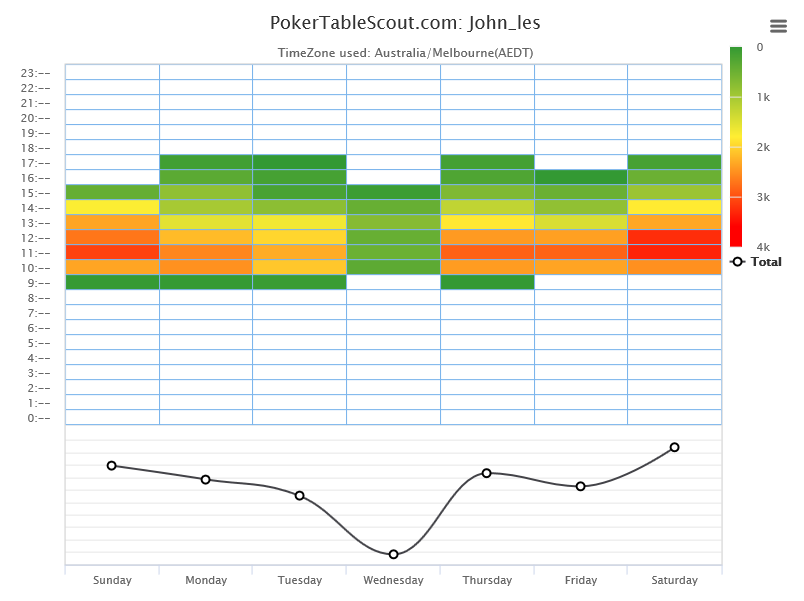 He seem to be grinding 7-8 hours a day, but very little on wednesdays.
The peak seem to be on saturday and sunday.
Another interesting thing to notice, by looking at the color of the cells in the graph above: Early in the morning he can be found on much more tables than 2-3 hours before the usual end of his sessions. At some point he most likely stops to join new tables and finishes the ones he’s playing at right now.

The players we looked at so far are more or less fulltime players.
The next player we want to look at shows a different pattern: 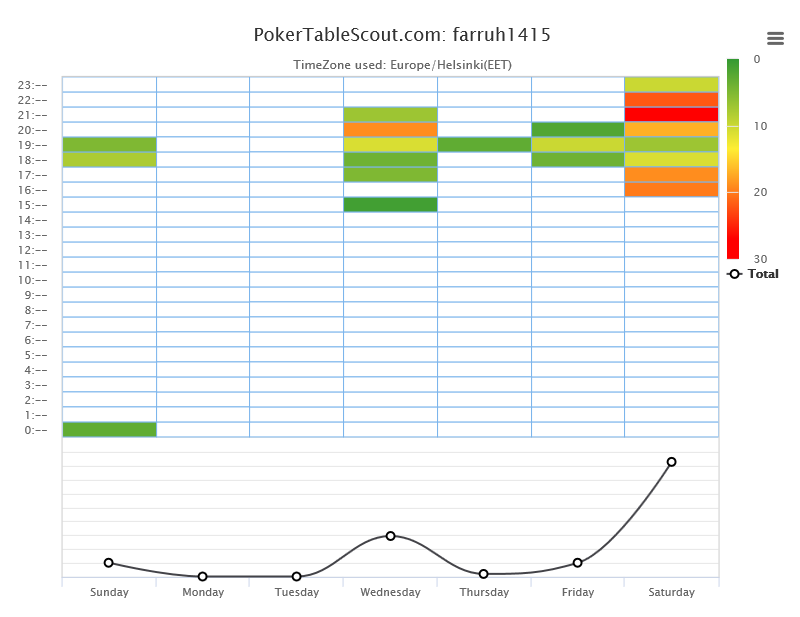 He seem to be a recreational player. He doesn’t seem to play that much during the week,
and even when he play, he’s playing from 4pm until 8pm with the exception of saturday.
On Saturday he seem to play the same volume of hands than all other days combined.
We have about 6.000 hands of him on record, in which he lost roundabout 120.000 USD.
If he’s a player you want to play with, then you have to watch out Saturday between 4PM and 1AM EET.
Statistics for farruh1415

Another recreational player to finish this article with: 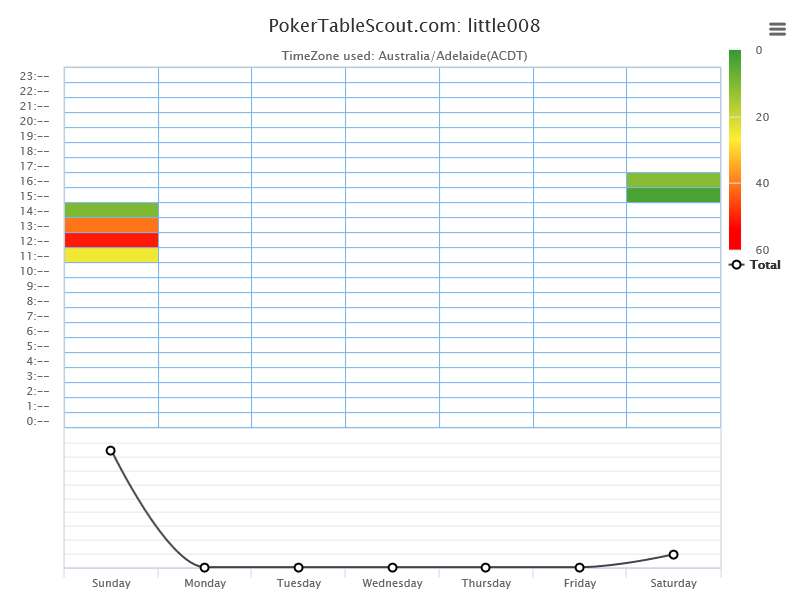 He’s probably playing from Australia. Using this Timezone will shift his play to the afternoon.
He lost about 18.000 USD within 14.000 hands, but the only chance to meet him at the tables is Saturday and Sunday at 0.25/0.50 No Limit Hold’em.
He doesn’t seem to play any higher stake yet.
Statistics for little008